Learn how Bears of Hope experienced 10 years of continuous growth with GoFundraise.

Bears of Hope’s annual Beards of Hope campaign is wrapping up now and we’re delighted to announce that it’s raised over 58% more than it did last year! Read the details and watch our video interview with Co-Founder and Vice-President of Bears of Hope, Toni Watson.

Beards Of Hope calls on bereaved dads and their mates, sporting clubs, corporate businesses and the wider community to grow a beard during Winter and brave the shave in September, raising funds for and awareness of Bears Of Hope Pregnancy and Infant Loss Support.

One in four pregnancies end in loss in Australia. Tens of thousands of parents will need support every year during the most devastating time of their lives. Bears Of Hope provides support to families who experience this loss.

The growth from this year’s Beards of Hope campaign was seen across both the number of people registered for the event and the amount raised.

Some of the key reasons for growth in the campaign were:

The Bears of Hope campaign was built by Toni Watson (Co-Founder and Vice-President) of Bears of Hope herself, using GoFundraise’s Event Creator Vision (an easy to use, mobile optimised, fundraising event builder and registration form creator with drag and drop tools). 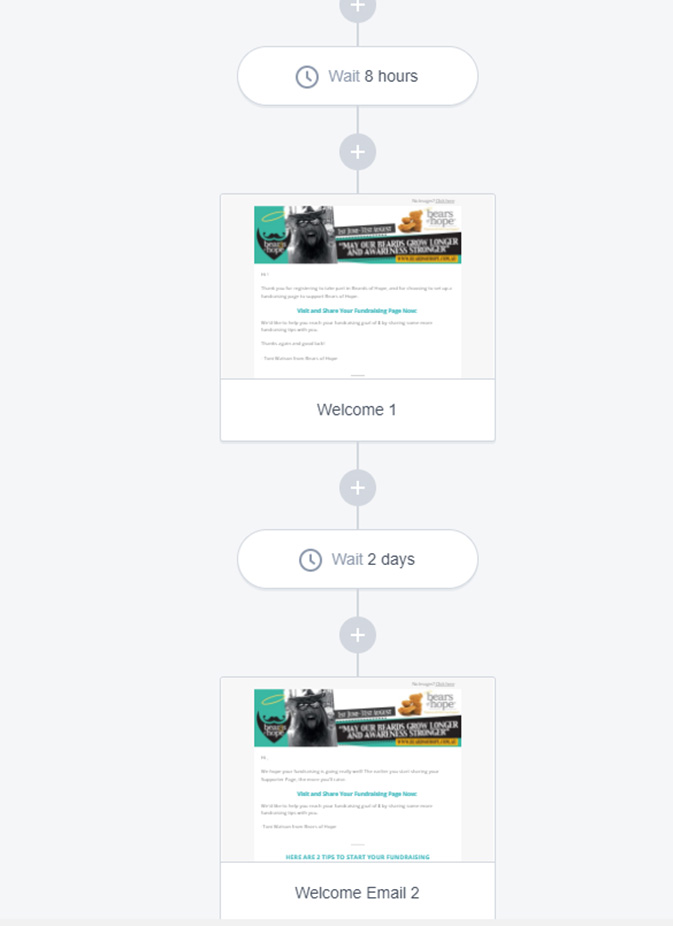 2018 was the first year that the Beards of Hope also used email engagement (integration with Campaign Monitor) through GoFundraise.

When asked about it, Toni Watson (Co-Founder and Vice-President of Bears of Hope) said,

“We have recently invested in automated emails through GoFundraise for our Beards of Hope campaign. That has taken off a lot of pressure on myself to send out hundreds and hundreds of emails, like when they’ve reached their incentives or when I need them to complete a form. It’s all there in the automated emails so that has really reduced the amount of time I was spending on emailing everyone.“

GoFundraise has been working with Bears of Hope since 2009 and are very proud to have contributed to their success and to have helped raise more for such an incredible cause. In the time that we’ve been working together, Bears of Hope have dramatically grown their fundraising by leveraging digital. Toni explains,

“In 2006, we raised $2,000, the two years after that, we had raised about $20,000. In 2009, we were introduced to GoFundraise and online fundraising by a bereaved Dad whose little girl, Sophie, had recently been born without breath. He wanted to run a marathon in a leprechaun suit to honour her life but also to help us with our goal of developing our own bear of hope to donate to parents. Adrian raised almost $30,000 –all up in online fundraising, we raised about $45,000 that year. That was in 2009 and in this year, the last financial year, we have hit just under $400,000!”

“We had never heard of online fundraising [before Adrian participated in Blackmores Sydney Running Festival in 2009], we’d never used it. We had been selling raffle tickets, selling chocolates and entertainment books– this opened up our whole fundraising world to raise more funds. It was so easy! That was the remarkable thing about it, it was easy for the donor to make a donation and receive a tax receipt and we could manage it from our office.”

When asked about how Bears of Hope have grown so significantly, Toni said:

“There’s many different factors that come into play for the growth of the organisation. I think having a simple online platform helps – in this day and age everyone wants convenience, they don’t want to be clicking through too many buttons as a donor. Having that streamlined and made really easy for the donor has really helped. It’s also helped me with managing, developing and building the campaigns – I’m self-taught. I’m not overly tech savvy but I‘ve been able to develop really fancy campaigns.”